What is functional neurology in Tupelo, MS?

Functional Neurology is a specialty in healthcare that focuses on the health and performance of the brain and nervous system and how they interact with the body. Functional neurologists check to see if the nervous system is not working in the following areas: abnormal sensations, abnormal motor functions, abnormal thoughts, or abnormal posture. The brain controls every function in your body and your body provides feedback to the brain. If the communication between your brain and your body breaks down, so, too, can your health.

If you are seeing a practitioner that is only looking at one system such as the digestive system but you also have dysfunction in your nervous, endocrine, and immune system, how can you possibly get better?

How does the brain work?

Your brain controls and coordinates all function of the body (Grey’s Anatomy). When functioning normally, the cerebellum, which is the back bottom part of your cranium, sends messages or “fires” to the brain (right and left hemisphere) which in turn “fires” to the brain stem (mesencephalon, pons, and medulla). This is called the “Brain Loop”. 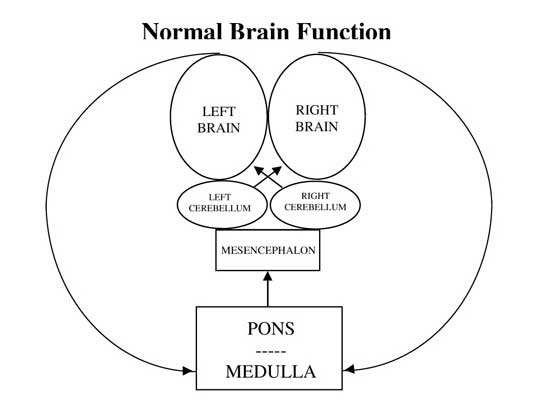 When functioning correctly, the cerebellum receives adequate input, sending normal input to the brain’s frontal lobes, which sends sufficient input to the lower brainstem, keeping the mesencephalon from over-firing.

Stress – physical, chemical, and emotional stress will adversely effect this “brain loop”. Stress is not necessarily a bad thing. However, it is the constant, pervasive, never-ending stress of our culture that is so detrimental. 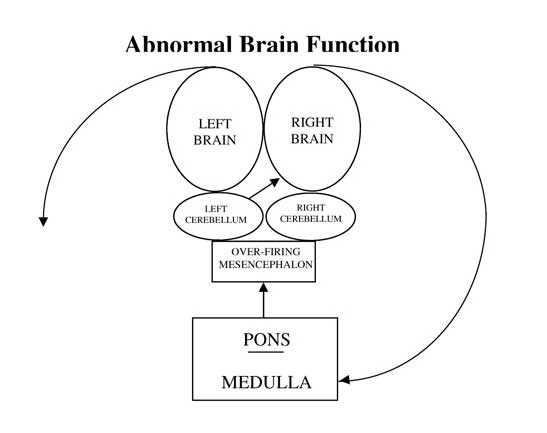 If one side of the cerebellum is not receiving enough nerve input, it cannot send sufficient nerve input to the frontal lobe, which can’t send enough input to the lower brainstem to keep the mesencephalon from over-firing.

What’s the deal with the mesencephalon?

The mesencephalon (a.k.a. upper brain stem, a.k.a. midbrain, a.k.a. cerebral peduncle) normally is inhibited by the brain. In other words, when the “brain loop” is intact, the mesencephalon is turned off (or on low).

However, once stress interrupts the “brain loop”, the mesencephalon is left unchecked. Basically, the brain gets stuck in a sympathetic (fight or flight) response.

A mesencephalon that is not firing properly causes symptoms such as fibromyalgia, ADD, sciatica, etc.

What about the cerebellum?

Another key part to the “brain loop” is the cerebellum. This is the back, bottom part of your brain that controls your balance and coordination, spinal postural muscles, and terminates eye movements. When one side of your cerebellum is not firing properly it can lead to a host of common ailments.

A mis-firing cerebellum will cause one side of the postural muscles to be in constant spasm. This one-sided muscle spasm will cause imbalances in the spinal bones. Additionally, individual vertebrae will lock up and be restricted in their normal movement. Consequently, chronic back and neck pain, spinal degeneration, arthritis, disc herniations, and sciatica may develop. Once pathologies are ruled out, chronic dizziness and balance disorders are usually the result of cerebellar dysfunction.

How do you fix the brain?

A safe, gentle, hands-on, dynamic integration process is used to re-boot, reconnect and restore proper brain function. Traditional chiropractic instruments and/or adjustments are also used, but they are used in a very precise manner?to stimulate function in the effected part of the brain.

In addition, visual, auditory, and olfactory stimulation, heat, eye movements, eye exercises, and other modalities may be used to increase brain firing.

What health problems can you help with?

Please understand that BBT is not a specific treatment for any disease, illness or disorder. We do not try to cure anything.

Our expertise lies in naturally and holistically re-wiring your brain and then getting out of the way so your body can heal.

However, once the “brain loop” is restored and any brain imbalances are minimized?amazing things can happen. The following is a list of health conditions people have shown significant improvement with:

Brain-Based Therapy (BBT): A revolutionary breakthrough treatment program pioneered by the country’s leading chiropractic neurologist, Dr. Fredrick Carrick. The treatments are all neurologically based and clinically proven to help with chronic pain, balance disorders and other neurologic conditions.

Eyelights Therapy – Eyelights were designed to provide optimal stimulation to the brain using the optic nerve. Glasses designed with flashing lights built to fit behind the lens, they can be programmed to blink on the non-dominant eye in order to strengthen the weaker side of the brain. Since one of the most direct avenues to the brain is via the eye, a child can learn more effectively if they are seeing correctly. And an athlete will perform better because the eye is able to gather all of the information necessary to perform.

Unilateral Adjusting: Understanding how and why to specifically adjust areas of the spine is very important to creating the best possible outcomes. Dr. Barlow has completed over 600 hours of neurologically based adjustment courses.

LORDEX Decompression- Non-Surgical Spinal Decompression: A computer guided system that gently lengthens and decompresses the spine to provide lasting relief from chronic neck and back pain due to disc problems. We were one the first clinic to bring this type of care to Tupelo in 2005. Years of experience have given us a clinical edge allowing you to get the fastest relief possible.

ATM2™ System: A unique exercise device that provides relief from chronic neck, back, shoulder and hip pain by restoring core muscles and increasing range of motion. Can bring back pain relief in as little as 5 minutes. Visit www.backproject.com for more information.

HealthLight® – InfraRed (IR) Therapy: Infrared therapy is an FDA cleared treatment that has been shown to decrease pain, inflammation, speed healing and more. By directing specific frequencies of infrared and near infrared light to the body this painless treatment can accelerate the healing process and increase circulation. IR has been clinically shown to help with Carpal Tunnel, Peripheral Neuropathy, RSDS, Fibromyalgia and other painful conditions.

Nutritional Counseling: Part of the bigger picture to restoring your health is how you eat. We have specialized training to provide you with sound direction when it comes to eating well and supplementation.

Glutathione Therapy: Known as the mother of all antioxidants, glutathione is found in almost every cell in the body. Glutathione can help decrease pain and inflammation, give you more energy and rid your body of numerous toxins.

Individualized Home Exercising Planning: Many of our patients want to take an active role in their recovery. We empower you with individualized exercise programs tailored to your specific needs. These plans often contain several ‘phases’ that change as you become stronger and healthier. Let’s make you the best you can be.

RealEyes by Micromedical: video of eye movements that is extremely helpful in treating patients with balance disorders, dizziness, and vertigo. Visit www.micromedical.com for more information.